IT'S TIME TO END BULLFIGHTING IN PORTUGAL

The Foundation Marchig is opposed to the brutal and barbaric pastime of bullfighting in Portugal and is supporting a public education programme in the country.

As with any other bullfight, Portuguese-style bullfights are vicious spectacles, undertaken merely to provide so-called ‘artistic entertainment’ and pleasure for the watching people, but which cause real cruelty, terror and suffering for the animals involved.

Prior to the actual fights, bulls are transported to the bullrings in cramped cages. Once there, the ends of the horns which are extremely sensitive are sawn off, causing blood loss and severe pain. This practice also causes the bulls to become confused, as the ends of the horns are used to help guide the animal’s movements. The bulls are then deprived of food and water right up to the moment they enter the ring, leaving them weak.

Far from being the aggressive animal that supporters of bullfighting would have us believe, the bulls behaviour in the bullring is driven by the sheer terror it now feels and senses as the crowd bay for the torment to begin. This fear is increased by the sheer physical suffering the bull endures, as it is tormented by bullfighters on horseback that drive several long harpoon style spears into the animals back and neck muscles. As a result of all this brutality, the bull becomes further physically weaker as the blood loss begins to take effect causing feverish dizziness. The horses too are often badly injured.

It is at this time, that a group of eight men called ‘forcados’ push and kick the bull, whilst pulling violently on its tail. This lasts for some thirty minutes after which the bull is taken from the ring and the harpoon style spears removed, by cutting into the flesh around the spears. No anaesthesia or pain relief of any kind is given. The bull is then left, sometimes for up to two days, before being taken off to the slaughterhouse where it will be killed and its torment finally brought to an end.

In the towns of Barrancos and Monsaraz close to the Spanish border, bulls are allowed to be killed in the arena ‘Spanish style’ by having a sword driven into the heart, under a law that prohibits this type of spectacle, but makes an exception for places where the tradition has been maintained for fifty uninterrupted years. 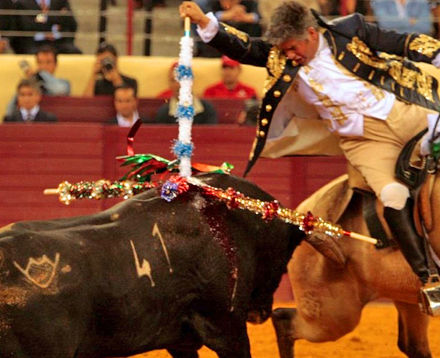 TORMENTED BY BULLFIGHTERS ON HORSEBACK 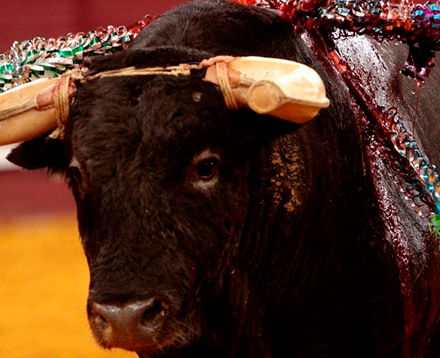 DRIVEN BY THE SHEER TERROR 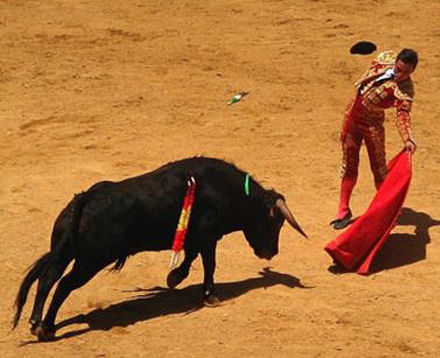 CRUELTY FOR SPECTACLE AND PLEASURE

In recent years, the opposition of the Portuguese people against these barbaric events has increased considerably. In the north of the country, very few bullfights now take place after several municipalities banned them and converted the previous bullrings into spaces to be used for sport and culture.

The presence of children in the bullrings and arenas has also been widely criticised, with the United Nations Committee on the Rights of the Child, warning Portugal in September 2019, to ban the entry of children up to 18 years in the bullrings and within the bullfighting schools. With the support of the Foundation Marchig and other concerned organisations, the Basta de Touradas (Enough of Bullfights) platform has begun to change the status quo of bullfighting within Portugal.

Bullfighting and the deliberate torment, suffering and cruelty for spectacle and pleasure have no place in a civilised society. Bullfighting in Portugal and in other countries around the world must end.